When the Retirement and Re-employment Act (RRA) came into force back in January, I had hoped that tapping on our Silver Workforce would eventually be the norm and second nature for employers. Reading the “Retirement and Re-employment Practices, 2011” report, I’m glad to see that this mindset had been steadily embraced amongst private establishments last year, even before the RRA. 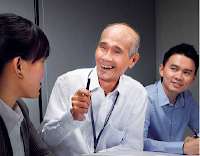 Nearly 97% of the 11,500 local employees who were retiring in the year ending June 2011 were offered employment beyond 62. I believe that this is in part the impact of both the tight labour market as well as tripartite efforts at promoting re-employment. Also, about 8 in 10 private establishments surveyed had implemented measures to allow their local employees to work beyond 62 in 2011. And among the 2 in 10 establishments that had not implemented measures to enable their workers to work beyond 62, it was mostly because the company did not have any employees approaching 62 yet.


Our tripartite partners will press on with our concerted efforts to ensure that our older workers are amongst those Singaporeans with good jobs at the core of our workforce. Our Silver Workforce will increasingly become a valuable asset that companies should look at preserving as we ease our reliance on foreign manpower,and move towards a more-productivity-driven economy.

But beyond the economic nuts and bolts, it’s also about doing right by our older Singaporeans. From this year, our baby boomers – those born between 1947 and 1965 – start to turn 65. By 2030, there will be fewer working-age citizens to support a growing elderly population. Re-employment helps ensure that healthy older workers who can and want to continue contributing to their organisations are offered the opportunities to do so. It helps them sustain a regular income and build up their retirement adequacy, hence maintaining their dignity as active and contributing members of society.

Each of us can play our part– be it as employer, employee or even a colleague. Make every effort to stamp out ageist mindsets and treasure the cumulative knowledge and experience of our Silver Workforce. Value and recognise their contributions, and accord the respect they have both earned and deserved in bringing us where we are today. Our attitudes towards our elders and how we treat them reflect not just the values of the society we live and work in now, but also represent the legacy we pass on to our children.

Posted by Ministry of Manpower at 12:42 PM