I am currently in Berlin, Germany on a tripartite visit, after the ILO session in Geneva. The mood here in Europe is overcast.  Everyone I speak to, from my European counterparts, business leaders and unionists, share the same sense of anxiety over the Eurozone economic crisis. Their concerns are indeed real – we are seeing a worsening outlook for global job creation, especially in the US with the “jobless recovery” and the soaring unemployment rates across most of Europe which average some 11% in April this year (for Eurozone nations, seasonally adjusted). Unemployment rates went as high as 24.3% for Spain!

So what does this mean for Singapore?
Today’s Q1 2012 report shows the impact of the subdued global economic outlook on the employment landscape, with the overall seasonally adjusted unemployment rate rising slightly to 2.1% in Mar 2012, from 2.0% in Dec 2011.  Similarly, the unemployment rate increased over the same period for residents from 2.9% to 3.0% and citizens from 3.0% to 3.2%. We have also seen some easing of tightness in the labour market, with job vacancies falling to 105 job openings for every 100 job seekers, compared to 120 per 100 (seasonally adjusted) in Dec 2011.
For employers, this is some relief as it means manpower shortages would have eased somewhat with a closer balance of vacancies and jobseekers in the labour market. So it could be slightly easier now for employers to fill vacancies. For job seekers, while there has been a drop in vacancies, the fact remains that there are a sizable 47,000 vacancies (non-seasonally-adjusted) waiting to be filled.  Nonetheless, with the ratio of job openings to job seeker at close to 1 to 1 (seasonally adjusted), some may not find that ideal job-match. Some may have to be more flexible in their job search. While others may need to undergo training so they can refresh their skills and improve their employability or move to another sector.
Some Concerns Looking Ahead
One concern is that while long-term unemployment has remained low, the long-term unemployment rate crept up over the year for residents aged 30 to 39 (from 0.3% to 0.4%) and mature residents aged 40 & over (from 0.7% to 0.8%). Nearly one in four (24%) or 14,000 of the unemployed residents in March 2012 were looking for work for at least 25 weeks, up from 22% or 11,800 a year ago.
What does it mean? This group of job seekers remains unemployed and is still unable to secure a new job after an extended period of time, thus, skills obsolescence could potentially set in.
We are working closely with WDA to see what more we can do to help them – the key is to ensure we get those displaced from work to take up new jobs quickly while also being job ready for their new positions – whether it is through training and gaining skills in the same or different industry.
CaliberLink has been playing this role since it opened its doors earlier this year, particularly for PMEs. The one-stop employment exchange and learning gateway, set up by WDA, helped 55-year-old Mr Cheong Yew Leong. Mr Cheong used to work as an IT administrator for a manufacturing firm before he was laid off due to a downsizing exercise last year. 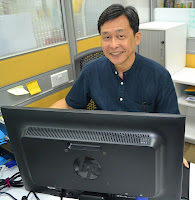 After being laid off, Mr Cheong tried to find full-time employment. However, for the first six months, he only managed to secure IT jobs on a freelance basis. Then, he found out about CaliberLink. A staff at CaliberLink informed him of a recruitment event, which he attended. At the session, he had the opportunity to meet up with representatives from companies like Hewlett-Packard (HP), Challenger and NTUC Income. They shared with Mr Cheong their hiring plans and he realised that some of them had available positions that were suitable for him.  Soon after the recruitment event, he was invited by HP to attend a job interview at CaliberLink. A month later, he was hired and is now a Field Service Engineer.There are many more examples of those like Mr Cheong, who have sought and found job assistance through CaliberLink, Career Centres@ CDCs and NTUC’s e2i.  And the good news is that more of them are being placed and job-matched, with about 1,600 unique placements in April, compared to about 1,200 in January. We must press on with our efforts on this front.
Looking Ahead
Overall, employers surveyed have indicated an improved employment outlook. They expect to expand headcounts in anticipation of better business conditions ahead. In line with this sentiment, earlier in the week, the HR consultancy Manpower released its survey which showed that a net balance of some 23% of employers are predicting an increase in staffing levels in the third quarter.
Here at MOM, we continue to keep a watchful eye on the employment situation, even as analysts expect Singapore’s economy to grow some 3% this year despite the Eurozone crisis and global risks, which is on the higher end of MTI’s forecast range. In the second quarter, we will usually see more job seekers, particularly this year’s cohort of graduates, joining the job market. Together with our tripartite partners, we are closely monitoring the employment situation, and will be ready to tackle the ups or downs of both the economy and the labour market.

Posted by Ministry of Manpower at 12:21 PM