Time flies! We are coming to the end of 2013 in a week or so. It has been an eventful year – mostly fair, occasionally hazy, but we came through in decent shape overall. As with all organisations, we can always still improve, and we will.

Unemployment remains low, and real income grew more strongly compared to 2012. We enhanced laws to better protect our workers and announced the Fair Consideration Framework to send a signal to all businesses to consider Singaporeans fairly for job opportunities. We introduced measures to help companies reduce their dependence on foreign manpower, as well as WorkPro, which helps companies facilitate older workers and back-to-work women to rejoin the workforce. 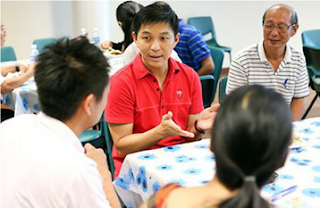 And more recently, officers from our various divisions responded swiftly to the Little India riot and reached out to foreign workers in their dormitories as well as employers, to reassure them and keep them informed about the latest developments.

Much has been done behind the scenes, and I know that my fellow colleagues have put in much heart and effort in making things better for fellow citizens. And before the year ends, I would like to express my appreciation to each and every colleague in MOM and our statutory boards – CPF Board, Singapore Workforce Development Agency and Singapore Labour Foundation. I am truly grateful for all their professionalism and dedication.

Many members of the public also appreciate what our officers do – I know, because they have conveyed their compliments and thanks in different ways. Your encouragement makes a difference, because our officers face increasing challenges in their work. Often, there are complaints and accusations thrown against the officers – from public emails to comments on Facebook pages and online sites. I always reiterate that it is critical to remain objective and look into the validity of the claims. And I have seen many cases often turning out to be more 'complicated' when further facts are surfaced. I asked my colleagues to surface a few examples for me to share here.

“C” came to us to report that her mother had not been paid for overtime work, and her contract stipulated more than 44 hours of work every week. We looked into it, and found that C’s mother had never worked overtime and her contractual working hours were within 44 hours per week. C admitted that her mother had asked her to complain to MOM, as her mother wanted to “stand up” for a colleague, whom another colleague in a different department in their company had been rude to. I would normally encourage us to stand up for our fellow colleagues and neighbours, but for the right reasons. In this case, we had to warn C that it is an offence to give false information to MOM.

Social media has led to an outpouring of emotions and sentiments, as well as complaints online. Some cases find their way to such platforms before we know about them. “S” posted online complaining that CPF Board (CPFB) had “refused to pay” him his monthly CPF payouts. We investigated, and found that he had closed his bank account without informing CPFB beforehand. CPFB was not able to send S his CPF payouts, and had to contact him to get new information about how his payouts should be credited. Within a week of obtaining his new bank account details, S was able to continue receiving his monthly CPF payouts. I encourage CPF members to approach CPFB first if they encounter any issue – and I’m glad that most do. CPF members can get their issues resolved much more directly and efficiently this way.

There are also cases that are not just unreasonable, but also fraudulent. We had someone come to us to complain that an S Pass-holder was working despite having a criminal background. We looked into it, only to discover that things could not be more different. It appears that the complainant had provided false information to MOM, and accordingly we have charged him in court.

Some complain and appeal and where we are unable to accede, they refuse to accept anything but the outcome they want. Their emails become increasingly rude, and contain threats to go to the press or post the matter online. I thought of sharing some of the emails here, but they are simply too vile.

This is just the tip of the iceberg of what MOM and our agencies sometimes have to deal with. In fact, all civil servants are facing this. But thankfully, such cases are the minority given the many that we handle. Nevertheless, in dealing with them, the officers have to invest time, effort and energy into investigations and checks. From the time a complaint or an appeal reaches us, our officers spend considerable effort piecing the details of the case together and then a proper assessment can start.

Some cases take a couple of months to process, as new details present themselves along the way. And as you have seen, some details can change the complexion of the situation quite dramatically. Regardless, we are committed to reaching a fair and unbiased outcome. I believe many of you will agree with me that our officers deserve to be able to do their work properly without having to deal with unreasonable or baseless complaints. Spurious complaints just add to the load, and delay legitimate cases.

My colleagues in MOM and our agencies are here to assist when cases are genuine, and will continue to do our level best to follow up on them. This is what we do in the MOM family. Our commitment is always to do our best for Singaporeans.

Once again, a big “thank you” to all in the MOM family as we come to the close of the year, and my wishes to you for a happy, safe and meaningful 2014!

Posted by Ministry of Manpower at 2:38 PM